You are here: Home / Depression / Do You have Athazagoraphobia?

I have learned a new word today.

Athazagoraphobia is the fear of

being forgotten, ignored, or being replaced.

Ooooh boy, what a powerful word that relates to intense feelings held by soooo many dissociative trauma survivors. And since abandonment and neglect is often a huge and prominent part of the trauma history, is there any wonder?

Here is a quote from www.fearof.net :

“Athazagoraphobia is a rarely discussed phobia. It means the fear of forgetting or the fear of being forgotten or ignored. Thus, Athazagoraphobia is of two types or has dual components: it might be seen in dementia patients in their early stages (or patients suffering from other medical conditions where memory loss occurs) where they fear forgetting their own identity and other things. Alternatively, it may be seen in spouses or caregivers of Alzheimer’s/dementia patients where the individuals believe their loved ones will forget them eventually, (or that they would be forgotten after the loved one has passed). It may even be triggered in the childhood where one has been left alone or been ignored for long periods of time.

It is a surprising fact that this phobia, while rarely reported, is actually quite a common phobia.

As stated before, the fear of being forgotten can arise in childhood if the individual has been left alone or has been ignored for a long time. Many sufferers of this phobia report feeling “inconsequential or unsubstantial” due to the feelings they undergo when left alone.

Medical reasons, particularly dementia and Alzheimers’ etc can also trigger the fear of forgetting things. Often, family members of people with conditions like amnesia or memory loss fear being forgotten by the patient.

Thus, the disorder has two distinct components: fear of being forgotten and the fear of forgetting. In general, doctors believe that a combination of medical/genetic issues and negative traumatic past incidents are the likely causes of Athazagoraphobia.

Symptoms of Fear of Being Forgotten Phobia

People with the fear of being forgotten phobia tend to have low self esteem and self confidence. Often, such people are inherently introverted, depressed or tend to lack the ability to interact normally in society. They are, by nature, shy and passive. At the same time, it is difficult for the person as s/he undergoes deep turmoil thinking repeatedly of “simply fading into oblivion”.” 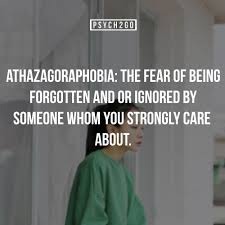 Okay. Big word, powerful meaning.  I certainly understand how this fear significantly relates for those suffering from Alzheimer’s or dementia.

However, it would be no surprise to me if many dissociative trauma survivors of long term, chronic abandonment and neglect also developed such phobia.

Here is additional information, as written on www.mostcommonphobias.com :

“Athazagoraphobia is the morbid and irrational fear of being forgotten. This does not refer to those who, for example, get stood up on a date, or have canceled plans. Rather, people with Athazagoraphobia are honestly afraid that people will ignore or forget that they even exist. They will also have an extreme fear of abandonment, although they are not the exact same phobia.

Symptoms will vary from person to person, simply because not everyone is alike and they differ on state of mind, level of fear, and many other personality characteristics. However, general symptoms include anxiety when making plans, anxiety when waiting on someone or something, over-attachment to people and objects emotionally, and constantly reminding others of plans or contacting them excessively.

People with Athazagoraphobia often also suffer from Obsessive-compulsive tendencies, especially when making plans with another person. For instance, they will need to plan out exact times and places, as well as have an established routine or schedule that must be followed exactly.

Now, if someone with Athazagoraphobia is, for instance, stood up, the other person arrives late, etc. a panic attack may set in. Panic attack symptoms include rapid heart beat, chest pain, difficulty breathing, weakness, fainting, dizziness, feeling a loss of control, tingling or numbness in the hands or fingers, excessive sweating, and chills.

Phobias are most often caused by some sort of trauma, which usually occurs during childhood but can occur at any stage in life. For example, if a child is abandoned, either a parent or parents leave or they are put up for adoption, they may be led to fear being forgotten. Also, someone who is stood up on a date or other event, any number of times, could develop the fear of being forgotten.

The presence of other psychological disorders or phobias could also be to blame. Again, the fear of abandonment is another phobia that occurs with the phobia of being forgotten. Also, while Athazagoraphobia could cause Obsessive-compulsive tendencies, the reverse is also possible. Obsessive-compulsive disorder sufferers need an exact schedule or routine and will often fear that something will get messed up, out of place, or out of order in this process.

Athazagoraphobia also does not necessarily have to have a direct cause. Nobody wants to be forgotten. Some people just fear this more than others, and maybe on an extreme level like those with Athazagoraphobia.

Therapy, although it does not work for everyone, is a great first step option in understanding and treating Athazagoraphobia. Social or group therapy is especially helpful for these people, since it allows them to see that many people will not forget them and are there to be loving and supportive. Family therapy or relationship counseling also serve this purpose.

Medication is available to treat the anxiety that comes with this phobia. Furthermore, it is helpful during panic attacks. Medication can also treat other symptoms of panic attacks, such as chest pain or breathing difficulties.

Lastly, it is extremely important for friends, family, and those who make plans with an individual suffering from Athazagoraphobia to stick to a plan. They need to make a conscious effort to not cancel these plans or forget about them. Eventually, over time, the person with Athazagoraphobia will learn to build trust in those around them.” 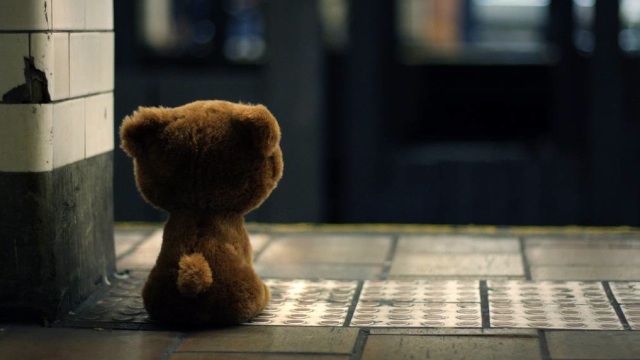 Has this been helpful information for you?

When I read it, I knew I had to share this information with the readers of this blog.  Many of you may be very familiar with the intense emotional pain felt and expressed in this fear.

What are your thoughts and comments about athazagoraphobia?

Do you relate in any way?

Please know I’m thinking of you, and wishing you the best in your healing journey.

You are not forgotten.