You are here: Home / DID Education / DID Insiders: Are They Parts or People?

The other day, I was part of a conversation asking the question whether the insiders in a dissociative system should be called parts or people.

And now, after recently reading Insomniac’s cute comment to me about that very same topic, I’ve decided to make a quick, informal post about it.

I’m interested in hearing what the rest of you think about this topic.

Personally, I really dislike the term alters, and I really don’t use it often – it’s not a comfortable term in my opinion.  Nope.  It has too many other implications for me, and I just don’t go there very often.

But the word parts – that one I have used many times.

Parts, insiders, inners, head-mates, your people, your team, your kiddos, child parts, your system, your inside system people, that other one, the one over there, those ones you are hearing right now …   There are many, many terms that can feel accurate to use in various situations.

It is true, that when I get to know people with Dissociative Identity Disorder (DID / MPD), and I get to know their insiders, those inside people become exactly that to me — people.

DID people are people with a lot of people.  I don’t see the insiders as “parts” anymore.  I see them, experience them, interact with them, relate to them, remember them, refer to them just like they are people in their own right.  Real people.  Not a part of one someone.  A group of individual someones.

For right, or for wrong – that is how it feels for me.

I realize this is probably not at all the expected “mental health professional” stance on describing dissociative systems.  It’s not an intellectual approach.  This is a statement about what the experience is like for me when I meet you all.

They are people that share a body, but they are people, many of whom are easily recognized as their own person within the group of people.

Inside people very much have their own voice.

They have their own presentation, their own thoughts, beliefs, memories, feelings, body sensations, facial gestures, perceptions, clothing, jobs, etc etc.

Each insider can potentially make the same body look very different — that’s so fascinating to me!

Insiders become their own selves.

And in a way that they are not parts of any one someone, but more like they are important members of a group.

Groups are one, but the groups are filled full of lots of different individuals.  Each of these individuals will have their own unique reason for being part of the group, and the whole of the group is completely flavored by the individuals that belong to it.

It is amazing to me that there are such differences between the people in a dissociative system.  I realize that many of these differences are probably related to the differing demands being placed on the person as a whole at the time of creating each specific new insider, including some not-so-happy reasons to need to be somebody else. 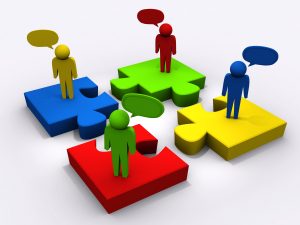 However, the basic ability to become somebody else (even to pretend to be somebody else) has got to be an incredible talent in itself.  I know I can’t do that very well (and yes, I have tried, funny enough.  I guess that’s why I’m not a Hollywood actress, lol.)

In this article, I’m obviously not touching on the very difficult topics exploring the need to split and to become other people — will save that discussion for another day.   Needless to say, I think it is an incredible skill to have been able to escape and separate yourselves from all that you needed to be separate from.

My hat is off to dissociative people who have created and developed highly sophisticated life skills at being different people.

It’s a rather awesome ability, if you ask me.

Three cheers for all of y’all who are managing life with DID !!