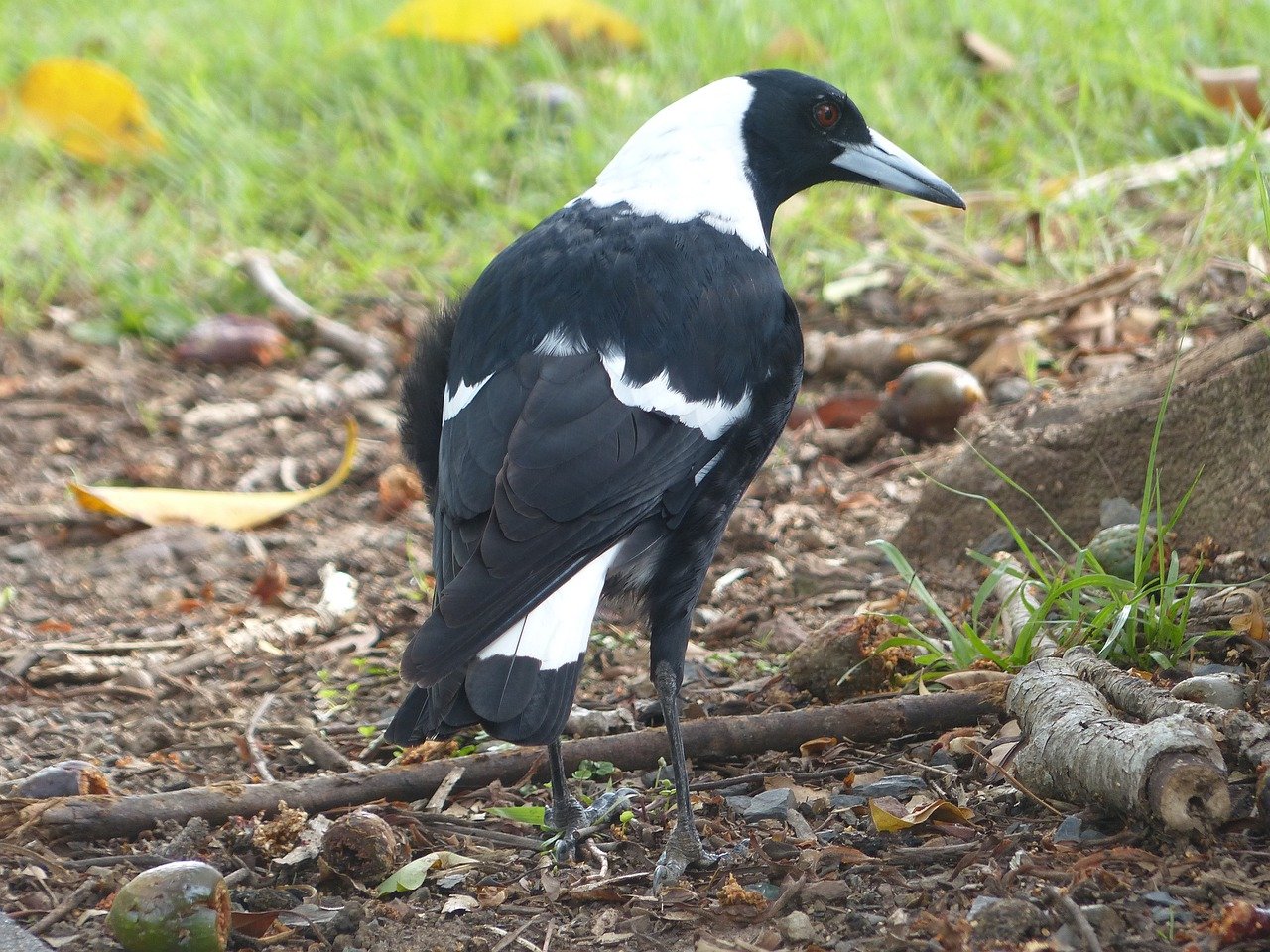 I do have some short little stories I would like to share that are on the fun side.

Animals have always been very important to me, and for most years of my life, I have had a variety of pets – lots of cats, dogs, horses – and when I was little I had a pet raccoon called Petunia, a pet pig called Snorkie, and a pet calf called Grassyhopper.  I would be writing for a very long time if I started through the list of critters that have been my best friends through all the years!

When I lived in Australia, I made some brand new critter-buddies — I met a tiding of magpies.  (Tiding… hmmm, that’s a very odd word.  It reminds me of tidy, and believe me, magpies are not exactly tidy!!!)  Magpies – to me – are a group of birds that are now affectionately known as Maggies, or Maggie Babies, or Baby Pies, or simply just “Pie”!!

I’ve not had much to do with birds prior to this year, so meeting and enjoying birds has been a fun, new adventure for me.  My maggie babies have been a nice surprise.  I didn’t know that birds had as much personality as they do!

Maggies look very similar to each other, and even though I have the incredible experience of having a close personal look at as many as 16 birds surrounding me within arm’s reach at a single time, it’s still hard to tell them apart.  However, I have been able to distinguish a few of them from each other.  Today, I want to introduce you to one of them – a small little maggie girl named Walks Inside.

Walks Inside distinguished herself by her willingness to walk right inside the balcony door.

The other maggies stayed grouped together out on the balcony, singing their greetings from the sunny outdoors, but little Walks Inside preferred to walk right inside the house, having a little peek here and there all by herself.  Her trusting nature seemed odd, but I welcomed her friendliness.  She liked to eat her treats at least twice a day, she definitely preferred being hand-fed, and I fancied believing that she enjoyed the individual attention she got by visiting me all on her own.

One day, Walks Inside was walking different.

Actually, she was limping, or more accurately, she was painfully hopping on one foot, barely walking at all.  Somehow, somewhere, she had gotten her delicate left foot tangled and wrapped in loops and loops of fishing line.  She clearly had been pulling and tugging and pulling and tugging at the unbreakable line with absolutely no success at freeing herself from its ever tightening hold.

From a distance, I watched her peck and pull at the line, clearly confused and struggling.

The amount of looping line around her foot made this a very dangerous and life-threatening situation for little Walks Inside.  She could have easily got the loops caught in trees or bushes or on any other jagged, hooking edge.  If that happened, she would be stuck there, like a small feathered prisoner, unable to fly away from danger unless she was found and assisted with regaining her freedom.

Once I became aware of this predicament, I watched especially closely for Walks Inside.  Many times, everyday I looked to see her.  I was worried for her and I wanted to make sure she was still okay.

My friend and I knew that something had to be done before Walks Inside got caught somewhere, or before she lost her foot, and before any other tragic end would come to her beautiful little self.  We thought and thought, and finally made a plan.

It took several tries and re-thinking of our process for our plan to work.  Since Walks Inside already knew how to make herself at home by walking right inside the house, I purposefully gave her treats to invite her even further and further inside the house.  I wanted her to come inside far enough that we could gently shut the door behind her, and then work on plan B – somehow catching her so I could carefully remove the line from her foot.

Walks Inside had been happy to eat treats from my hand in the kitchen, but she really wasn’t so sure about those moving doors!  She would quickly hop and fly away when the doors misbehaved to her disliking.  Apparently, Walks Inside didn’t have any intentions of being a long-term houseguest!

But we knew we needed to catch her inside if we were going to be able to help her, so we tried again, and again.

Eventually we did it!

Once she was inside, she tried to fly out a window, and my friend was able to catch her gently with a towel.  We made sure she was sitting comfortably within her towel, and my friend held her in one place while I worked at freeing her little tiny leg from the layers of fishing line.

Little Walks Inside was amazingly calm during all this.

I expected she would be fearful, and upset, and that she would try to fly away, but she did not show any of that.

She sat calmly, snuggled in her towel, looked right at me, and acted like getting a pedicure — a birdie-cure? or a pedi-claw? —  anyway, that a pedicure was an everyday event for a bird.

The fishing line was truly wrapped and knotted and looped and layered all along her left leg.  She was getting wounds already, and it was blaringly obvious that little Walks Inside would have never ever be able to tug the line off by herself.

It seemed like forever, but it probably took a solid 10-15 minutes to ever-so-carefully remove all the bits of the clear, nearly invisible fishing line tangled around all the claws of her feet and to pull it out of the wrinkled skin of her tiny little bird legs.  Walks Inside was very patient.  She seemed to know we were helping her and not bringing her harm.

All the bits of fishing line had dropped to the floor and her foot and leg were totally free and clear of any trouble.  As quickly as possible, we took her back out to the balcony so she could fly off on her own and enjoy her newly reclaimed freedom.

I worried that the ordeal may have scared her so much that I wouldn’t see her again, but in less than 15 minutes, she was back on the balcony, saying hello again, happily snatching another treat from my hand.

She was still limping with her sore foot, and holding it tucked up close to her tummy, but she was able to ever so gingerly stand on it with the toes of her foot stretched out properly instead of being all caught up in a tangled ball of fishing line.

Again I watched for her, and over the next few days, Walks Inside limped and favored her foot, but she was clearly getting better and better, and healing up well.

Now none of the maggie birds that visit me have a limp.

Isn’t that just the best news?

The word of easy pickings for bird treats has apparently spread around the neighborhood and several of my pies have also learned to walk inside the house.

It is fun, seeing a little community develop.  I actually have quite a few maggie stories that I could share!

But what is the moral of this story for dissociative trauma survivors?

To me, it is a story of courage, and having a willingness to trust.

It is a story of a brave little bird who risked letting someone very different from her help her with her wounds.

It is a story of appreciation and gratitude because little Walks Inside came back again and again, bringing joy and happiness with each of her visits.

It is a story of survival and a willingness to live, even when facing life-threatening situations.

It is the story of how a tiny little bird can have such a beautiful impact on people’s lives. 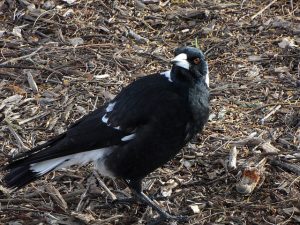 We can learn a lot from maggies!

Thanks bunches, Little Walks Inside!