You are here: Home / DID Education / Where Did I Put My Keys?

Last night I lost my keys in the office.

It was a silly ordeal – they were hanging right where I last put them – but it took me awhile to remember where that was.

I had a little help finding them, and I am really thankful that Mr. Janitor Man was so very kind.  He was patient with me, looking everywhere with me while I retraced my steps of the evening.

We looked under couches, in between cushions, under pillows, through trash bins, in the fridge, in drawers, in cupboards, on shelves.

I knew they had to be there – after all, I had just locked myself IN the building.  I hadn’t gone anywhere because I needed my keys in order to unlock the door to get out of the building, so I knew they couldn’t be far.

But where were they?!

It took awhile, but I gradually got closer to the last place I left them, I remembered exactly where they were.

Success!!  There they were – right where I left them.

And thank you, Mr. Janitor Man for your patience with me.

In order to find them, I simply had to stop and think about where I was when I last remembered having them, and go from there.  My keys were just a few inches from that place.

Today, I had to wonder how my thought processes were the same – or different – from survivors with Dissociative Identity Disorder (DID / MPD) who have to search for their lost keys.

A few weeks back, I was on the other side of this equation.

A DID survivor had lost her car keys for several days.

She had looked everywhere.  She had the feeling that they were still in the house, and remembered where She had last set them.  But the car keys were nowhere to be found.

To help her sort through the lost key issue, She and I had an entirely different process than I did with Mr. Janitor Man.

She had already re-traced her steps best She could.  It was clear the keys were not anywhere She thought they should be.

Because of the dissociative issues and system conflict in her life, there were several additional issues to consider:

It became obvious that She didn’t know where the keys were.  There was no use wasting more time asking her to find them on her own.

Asking inside – asking the parts in She’s system – to tell her where they were wasn’t working either.  Everyone was quiet inside, and no one was willing to say where the keys were.

The only feeling that She got in response to the questions was that the keys were still in the house.  She had noticed She could feel a little rise in tension when She looked in the kitchen.  She was guessing the keys were there, but She still had no idea. She had looked everywhere in the kitchen – a few times – and still couldn’t find them.

She asked her insiders again, and again – and still no one would cooperate with a direct answer.

It was beginning to get clearer that either someone was hiding the keys on purpose from She. It was also becoming clear that others inside were feeling too scared of Key-Hider to tell She where the keys were.  The awkward silence was very telling.

We tried directly asking Key-Hider where the keys were.

The only response to that question was a bit cheeky.  “If I wanted the keys hidden from her, why would I tell you where they are?”

Oh okay.  Got that message loud and clear.  So Key-Hider wasn’t going to cooperate.

I asked She to go stand in the kitchen.  Since it appeared that the insiders didn’t feel like they could show She where the keys were – She was clearly not supposed to see the hiding spot – we didn’t go against that rule.

Instead, we respected that rule.

I asked She to close her eyes.  I spoke to the insiders through She.  They were, of course, listening behind her.  As a rule of thumb, when talking to any part of the DID system, expect that there will be others listening in the background, even if the part you are speaking with is not aware of anyone else being near.

While She and her insiders were rummaging through kitchen areas, I continued to speak to the inside system.  I reminded them that She was not looking, that She could not see anything, and that they would not be breaking the rule of showing She where the keys were located, but I asked them to work together as a team.  Together, they were searching the kitchen for the car keys.

One of the things I mentioned to the Insiders was asking them if anyone else saw the Key-Hider hide the keys.

I continued to remind She to keep her eyes closed, and to let the Helpers find the keys through her hands with their hands.

Within about fifty seconds, She giggled.  She could hear the keys, and once She was holding the keys, She was allowed to open her eyes.

After being missing for days, the keys were found!

She was thrilled, to say the least.

She mentioned that the most significant things I said were that She herself didn’t have to be told or shown where the keys were and that Key-Hider wasn’t put on the spot with demands for immediate answers or cooperation.

The idea that we could completely obey the rules, respect the opposition, and yet go around the rules by working with the other Insiders made a huge difference.  She said she would not have thought about asking her insiders for help, but it made all the difference. 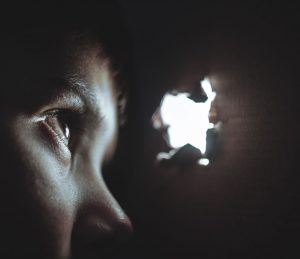 So what’s the moral of the story?