You are here: Home / DID Education / Not Getting to Be Your True Self – But Whose Life is it Anyway?

Do you get to be your real self?

I’ve been wondering what else I could teach about Dissociative Identity Disorder, using an episode of United States of Tara as the example.  Then I remembered the last minute of a show about Buck and his emotional pain.

And I thought more of how very painful and how very real that heartbreak is for Buck.

Throughout this season two, Tara has struggled with the fact that she is in fact multiple – that she does have Dissociative Identity Disorder – that she is switching, or “transitioning” as she calls it – that she has other parts to herself that also want time and attention and a little bit of life space.

In this episode, Tara is upset about having to share her life with her insiders and she has convinced herself that she is the only one in the body who should have a life.

Tara has decided that she “is” the life, and that no one else matters, just her.

Apparently she thinks that she, Tara, is the one and only important self.  No one else matters –she is the only one that matters.  Tara, Tara, Tara – it’s all about Tara.

The truth is, I’ve heard far too many hosts present with that kind of attitude.

And to the dismay of far too many host personalities, I completely disagree with that concept.

I vote for the system.

Meaning, if I had a vote regarding Tara, I would support Buck.

Buck is as real as Tara.

Buck is every bit as much of a person as Tara is.

Buck has his own thoughts, feelings, experiences, memories, wants, desires, etc.  He is as important as Tara is.

Can Tara stake claim as the ONLY part of the system that gets to have time?

Is she really the only one that is important?

I don’t think so. 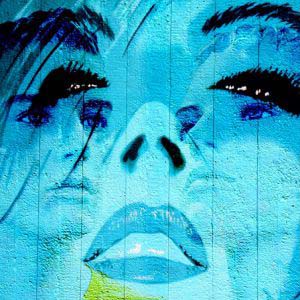 See – the way I see it – Tara is only a portion of the person.

She is not THE person.

Tara may have the upfront, outwardly social wife and mother role of the person, but she is not the whole person.

Tara is important, there is no denying that.  I would never ever say she isn’t important.  And she can be considered the leader of the system – I’m all for that idea as well.

But to say she is the only one that matters???

That is taking it too far.

I’m not saying that I am supporting the idea that Buck has been having an affair outside of the marriage vows.  An affair is an affair, and Buck is completely and fully aware of what he has been doing that would be so very hurtful to the husband.  He is responsible for the pain he has caused in his family, and like it or not, he is actually already married.  Buck has cheated on his husband, and he will have to face the music on that one.

Yes, Buck and Tara have a whopping lot of work to do in order to resolve this conflict but the fact of the matter is, Buck is his own person too.

And part of the current heartbreak for Buck is that Tara has staked a little more claim on how the outward life is managed, and that genuinely leaves Buck not knowing how to be or do what he wants to be or do in his own life right now.  No, it really isn’t ok for Buck to go out and have his own affair.  Yes, he really is his own person, but his actions still affect those around him.  He will need to figure out a way to live happily and fulfilled as himself without hurting others.  I don’t know how that will look for Buck, but that is the challenge he is facing right now.

The point I want to emphasize here is that the DID system insiders do count.

They are real, they do exist, they have their own wants and dreams, and they are as important as anyone else.  So squashing them out of existence, or refusing to give them time or acknowledgement is not okay.

Cooperation, compromising and sharing are absolutely important – but refusing to let the insiders have their own life-space is bordering on creating a self-centered dictatorship, in my definition.

If it were only that easy….

Sharing a body with 5-10-20-30 or more different insiders is extremely difficult.  There seems to never be enough time to do everything everyone wants to do.

It means that sharing the 24-hour day is essential.  It means that giving each other time in the body needs to be a coordinated, cooperative, ongoing process.

Finding ways to meet the needs, wants, and preferences of each of the different insiders is really complicated, and it does take a whole lot of work to find acceptable compromises.  The key word here, being compromise.  Tara can no more take over the life as completely her own any more than Buck can.

They have to find a way to work that out together.

Because they are both real.

And they both exist.

And they both can have a say in how life looks for them.

Because they are both important, and valuable, and necessary.

Buck really is as real as Tara.  And if he has to prove that, he can.

So to all the hosts out there – be willing to share the life-space with your insiders.  Because far too often, if you refuse to do that, your insiders could make a mutiny type decision like Buck did.  And that really never works out very well for anyone. 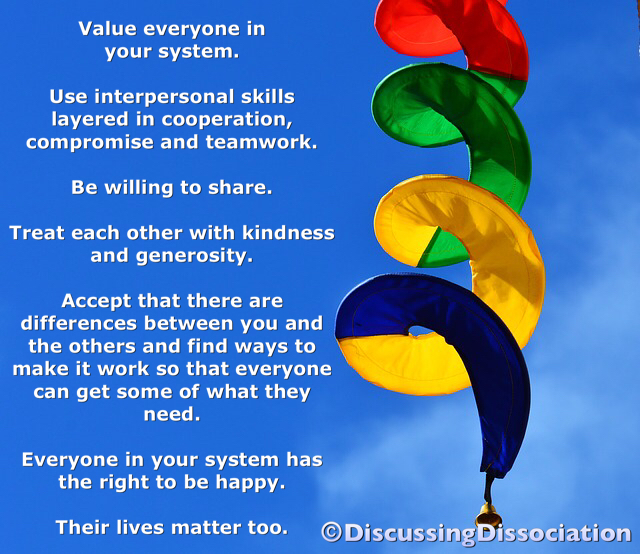 Value everyone in your system.

Use interpersonal skills layered in cooperation, compromise and teamwork.

Treat each other with kindness and generosity.

Accept that there are differences between you and the others and find ways to make it work so that everyone can get some of what they need.

Everyone in your system has the right to be happy.

Their lives matter too.

I wish you and your system the very best in your healing journey.