You are here: Home / Artwork / Internal Communication – The Core of Treatment for Dissociative Identity Disorder 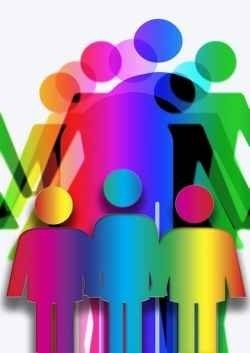 Focus first on relationship building with your parts.

Get to know them.

Overcome your fears of who they are.

Develop friendships with them.

I guarantee that your overall stability will greatly improve as you are more connected with your internal system on a genuinely friendly, caring basis.

In my opinion, developing good internal communication is the core of the treatment work for Dissociative Identity Disorder.

If you cannot or do not talk well with your other internal parts, you will not be able to complete your healing work effectively, thoroughly or sufficiently.

Imagine going to your place of employment and not being able to speak with any of your co-workers.  How well would businesses work with that approach?

Have you ever been to a big department store?

Imagine if the employees couldn’t speak with each other for days-weeks-years at a time.  That store as a whole would find it extremely difficult to manage busy days, or to handle simple, basic operations.  It would crumble.

Even if all the employees continued doing their own jobs perfectly — if they are not communicating with anyone else in the store, then the store as a whole would be less effective.  It would likely go out of business sooner than later.

If you don’t talk to your inner people, and if your various insiders do not speak with each other, none of you are going to function as well as you could.

Also, if you run your system with an attitude similar to Hitler’s, that’s not going to work so well either.

Approaching your insiders as inferiors or nuisances that you want to kill off, or dispose of, or get rid of in some way will not be helpful.

As our real-life example has shown, this type of dictatorship and abuse leads to tragedies like genocide and world wars.

Don’t go there with your internal world.

Treat your inner people with kindness and respect.

I promise you that every single one of your insiders has value, importance, strengths, and significance.

You might not understand who they are at this point in time.  And when you don’t know the positive value held by each person inside, that’s a big clue that you have some therapy work to do.

Allowing your system to stay scattered, chaotic, disorganized, and messy will not help your stability or ability to function.

Keeping with the store metaphor, who wants to shop in a cluttered, disorganized, messy store?  Can you find anything?  Does it take twice as long to find the things you need?  And are some items just impossible to find without taking huge chunks of extra time?

Permanently blocking your internal system behind walls or curtains or an unexplored blackness is not helpful either.

I realize that all DIDer’s have dissociative walls and barriers already — walls that could have easily been there for years.  That is the nature of DID/MPD.  It’s the initial point of having a dissociative disorder — surviving by using those same dissociative walls to separate yourself from yourself and from the situations and feelings that were too conflictual, too painful, too difficult, etc.

In the here and now, the treatment goal is to gradually lower and remove those barriers between your system people, and certainly not to create more walls or to support more distance between everyone.

Internal communication is the key to doing this work.

Doing your system work — meeting each other, getting to know each other, will in itself create a greater sense of order and structure within.

More of you will know who can do what, where the other parts are, and how they got there.  It won’t feel so strange or unknown to you.

Insiders can become friends with each other instead of being strangers separated from each other.

Even though there are additional steps to take, start by encouraging everyone in your system to be willing to see, meet, and greet as many others as possible.  You all need to know who you have in there.

My next post, Developing Internal Communication – Starting with the Basics,  will help you begin to develop communication within your system.

For today, in preparation to do this work, please think about the following:

You can do this.

Your healing depends on your talking with your internal system.

And you can do this.